Message from the Program Project Leader

The present quantum computer, the so-called a Noisy Intermediate-Scale Quantum computer (NISQ), currently has an achievable range up to about 100 qubits. However, a range between several hundreds to thousands of qubits may be possible in the near-future. The program aims to build a path to apply NISQ to socially significant issues. For this purpose, rather than extending the path led by traditional computing, we identify areas where the quantum advantage emerges. Another goal is to apply NISQ in areas linked to socially significant and academically valuable issues such as condensed matter physics, quantum chemical calculations, machine learning, and finance. The knowledge gained through the program should contribute not only to NISQ but also to develop fault-tolerant quantum computations as well as social implementation of quantum computing.

Quantum computing has been developed intensely and actively applied to industry, government, and academia since 2014. To date, the number of qubits has steadily increased. Additionally, quantum computing has reached the level where simulations are difficult with even supercomputers (quantum supremacy). However, over 20 years of research & development was necessary to realize a large-scale fault-tolerant quantum computer. Consequently, the use of NISQ is an urgent issue to seamlessly support ongoing long-term research development.

The research & development project theoretically elucidates the quantum advantage in quantum computers with limited functions and performance. We aim to find solutions using a quantum advantage to address difficulties in conventional computing and to find ways to utilize unique quantum characteristics.

As for major issues in current or future NISQ applications, advanced methods have already been developed in conventional computing. Taking these methods into account, we work in collaboration with experts in the fields of condensed matter physics, quantum chemical calculations, machine learning, and finance. Through such collaborations, we identify limitations of conventional computers and initiate research directions to resolve them using quantum computers. In particular, machine learning offers easily accessible software libraries, which can provide highly accurate results. Therefore, we plan to discover new applications of quantum machine learning with the quantum advantage even at the NISQ-device level, in cooperation with other quantum technology fields such as quantum sensing and quantum communication.

Intelligent Quantum System Design describes organic collaborations of the aforementioned activities: 1) establishing a theoretical quantum advantage in quantum computing, 2) designing quantum computer software and control methods to improve the performance of quantum computers, 3) innovating applications for machine learning, and 4) calculations in condensed matter physics and chemistry. We work on quantum software development and its applications based on the concept of intelligent quantum system design. 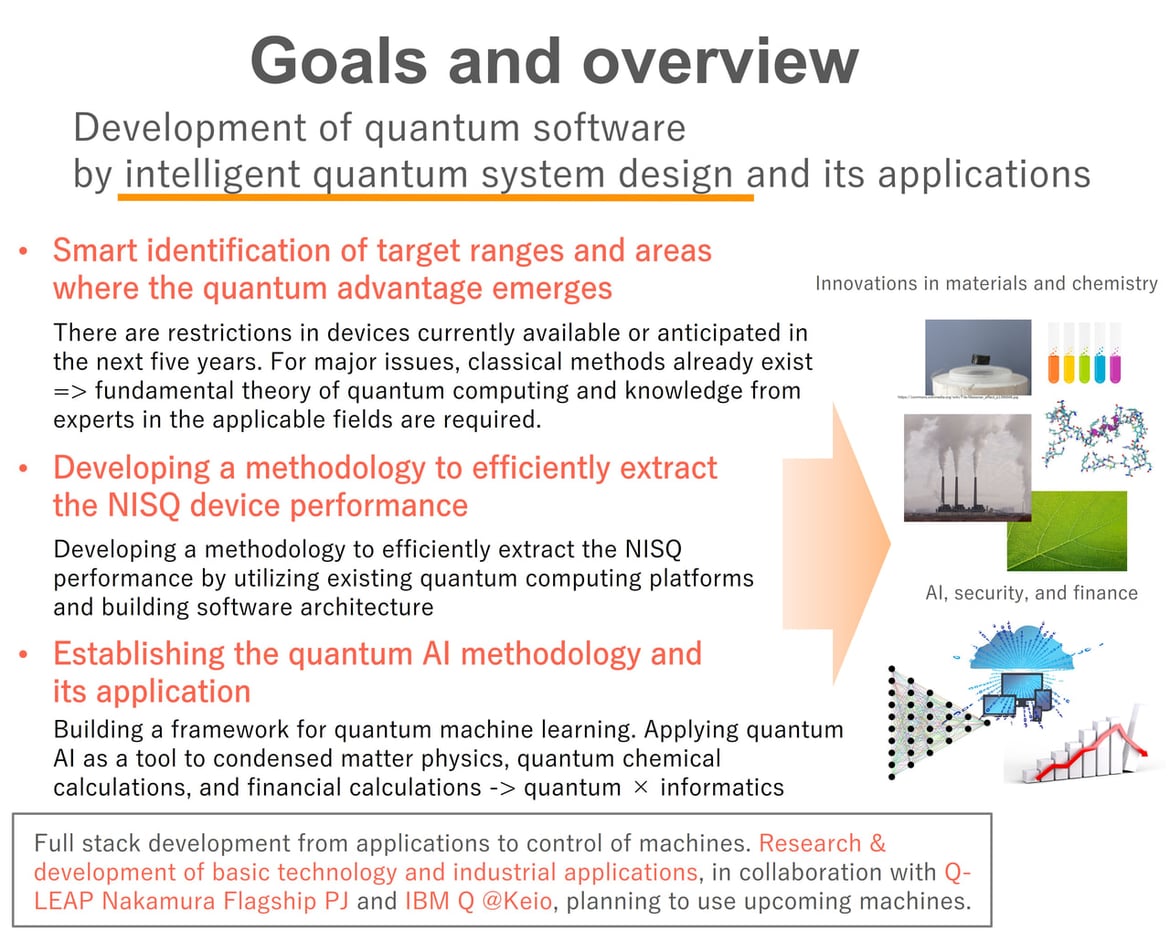